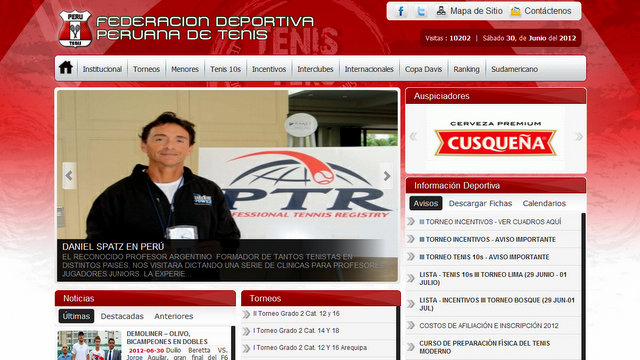 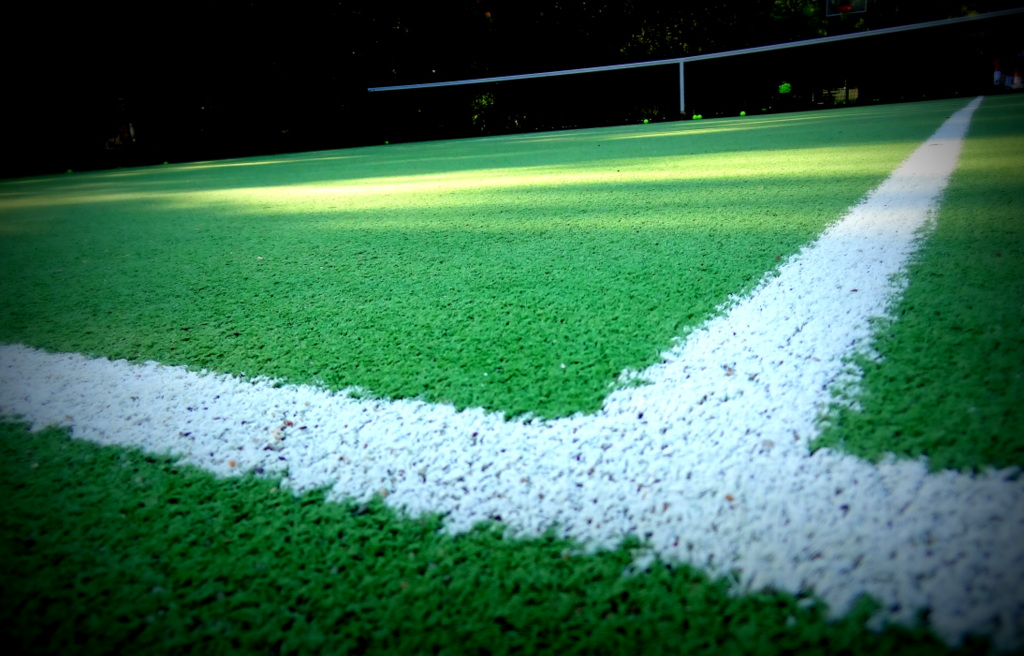 1. PLAY DEEP SHOTS WITH HEAVY TOPSPIN AND, SLICE TO KEEP THE OPPONENT BACK ON THE COURT.

2. ISOLATE OUR SHOTS BY HITTING ONLY TOWARDS ONE SIDE (E.G. BACKHAND)

GOAL: TO TEST THE OPPONENT CONSISTENCY OVER THAT PARTICULAR SIDE, AND ALSO TO CREATE OPENINGS ON THE OTHER SIDE OF THE COURT.

3. PLAY 2 OR 3 SHOTS TOWARDS ONE SIDE (EITHER FOREHAND OR BACKHAND) AND, THEN CHANGE THE DIRECTION BY HITTING TO THE OTHER SIDE OF THE COURT.

GOAL: TO MOVE THE OPPONENT AROUND AND ALSO CREATE OPENINGS FOR WRONG FOOT SHOTS OR DROP SHOTS AS WELL.

4. PLAY DEEP SHOTS AND LOOK FOR THE OPPORTUNITY TO BRING THE OPPONENT FORWARD BY HITTING A SHORT BALL.

GOAL:  TO FORCE THE OPPONENT TO MOVE FORWARD AWAY FROM BASELINE, TESTING HOW THEY MANAGE THIS PLAY, AND OF COURSE MAKING THEM RUN, CREATING OPENINGS ON HIS/HER SIDE OF THE COURT.

GOAL: TO LOOK FORWARD TO SET UP THE POINTS UTILIZING THE MAJORITY OF TIME YOUR FAVORITE SHOT. (E.G.)  FOREHAND, OR MAYBE BACKHAND CROSS COURT/BACKHAND DOWN THE LINE PATTERN. CONTROLLING THE CENTER OF THE COURT.

6. PLAY A RELENTLESS DEFENSE AND LOOK FOR THE OPPORTUNITY TO COUNTER ATTACK RAPIDLY.

GOAL: AGAINST A SUPERIOR OPPONENT, JUST TRY TO STAY ON THE POINT NEUTRALIZING HIS/HER POWER, BUT BEING ALSO OPPORTUNISTIC WAITING FOR THE RIGHT TIME TO HIT BACK AGGRESSIVELY.

7.  UTILIZE THE INSIDE OUT FOREHAND TO PUT PRESSURE ON THE OPPONENT’S BACKHAND AND LOOKING FOR THE OPPORTUNITY TO HIT THE INSIDE IN FOREHAND TO FINISH THE POINT. VERY COMMON TACTIC, FOR PLAYER POSSESSING A BIG FOREHAND.

GOAL: TO USE THE FOREHAND TO DICTATE PLAY

8. CREATE OPENINGS BY MOVING THE OPPONENT AROUND, AND THEN MOVING FORWARD TO FINISH THE POINT AT THE NET. THIS TACTIC IS CALL “SNEAK IN ATTACK” OR “DELAYED ATTACK”.

GOAL: TO STE THE POINT WITH THE FINAL GOAL TO SURPRISE THE OPPONENT BY COMING FORWARD AND FINISHING THE POINT AT THE NET.

9. ENGAGE THE OPPONENT IN A CROSS COURT BACKHAND RALLY TO TEST HIS/HER ABILITY ON THAT SIDE.

GOAL: TO OBSERVE HOW SOLID IS THE OPPONENT IN THIS SIDE, AND TO OPEN THE FOREHAND SIDE AS WELL.

ALSO TO SEE WHAT THE OPPONENT TENDENCIES ARE:

10. USE THE SLICE BACKHAND TO FORCE THE OPPONENT TO MAKE ERRORS AND ALSO TO ELICIT WEAK REPLIES TO ATTACK BY UTILIZNG OUR WEAPONS.

GOAL: TO PRODUCE LOW SHOTS TO KEEP THE BALL OUT OF THE OPPONENT IDEAL STRIKE ZONE, FORCING THEM TO HIT UP AND CREATING DISCOMFORT AS WELL. 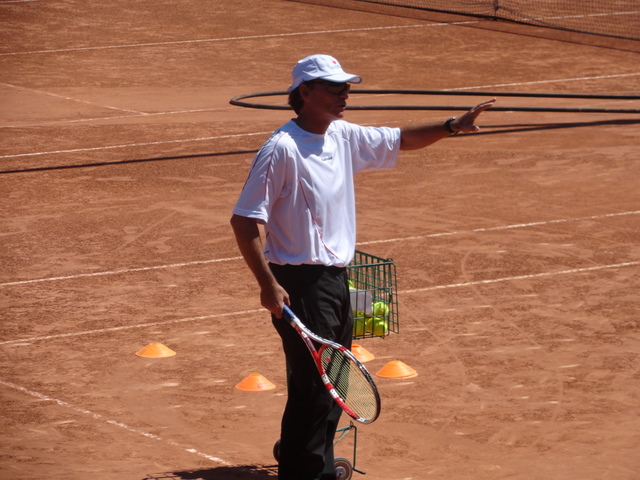 From Daniel Spatz’s Class at the 2010 PTR Symposium

STRATEGY: The overall game plan. The general idea about how you are going to play that particular match.

Basically there are three main strategies:

The strategy has to be based on the following factors:

b) Level of the player.

c) Personality of the player.

d) Level of confidence that given day.

e) Who is the opponent? Did they play before? First time?

f) How well prepared the player is for that match?

g) The surface where the match will be played (hard, clay, indoors, grass)

Has to be based on the following factors:

a) Capabilities and liabilities of the player.

b) Preferences when executing certain shots.

d) Previous preparation of these tactics.

PATTERNS OF PLAY: The specific combinations of shots to achieve the intended tactic. Also, the specific and individual response to a given shot.

IMPLEMENTING THE STRATEGY/ TACTICS AND PATTERNS

Sample Number 1   when preparing a match:

Overall plan: TO MOVE HIM AROUND AND ALSO TO DICTATE PLAY, ATTACKING THE SHORT BALLS.  OVERPOWER /OUTTHINK

# Controlling the center of the court by moving him around

# Bringing him forward to the net

# Occasionally serve and volley to surprise him

# Backhand pattern to establish order and set up the pattern

# Wrong foot play, to keep him off balance

# Serve out wide, 2nd shot to the open court

# Forehand from the center of the court

# Inside out & inside in forehand

# Topspin serve and volley to surprise

# Big down the line to open the court .Twofold: wrong foot or open court play

# 3 to the backhand and change to the forehand Twofold: wrong foot or open court play

Strategy:  Playing against a very aggressive baseliner, big serve and forehand, takes the ball on the rise, dictate play, loves down the line shots and likes to finish points at the net too. Likes short points. Not very patient when the rally gets long.

Overall Plan: TO BE VERY CONSISTENT, GREAT DEFENSE, KEEPING THE BALL AWAY HIS FAVORITE STRIKE ZONE, VARYING THE SHOTS TO CONFUSE HIM. OUTLAST- OUTTHINK

# To serve to the weaker side and to the body

# Cross court rally to force him to change directions

# Mix up the spins, pace and directions

# deep neutralizing shots to force him to hit one more ball

# Great defense to frustrate him , keeping the shots deep!

# Slice backhand to keep the ball low and force errors

# Slice backhand cross court, changing down the line to the forehand

# Heavy loopy shots to push him back

# Slice backhand when pulled out wide

# Counter attacking shots instead playing a passive defense to surprise him

# Slice serve to the body

# Out wide serve to pull him out of the court

# Blocking big first serves or hitting deep down the middle

5. QUALITY WHEN HITTING FROM THE BASELINE VS MY QUALITY. CAN I CONTROL HIS SHOTS WELL? CAN I DICTATE PLAY?

8. ATTITUDE IN GENERAL: POSITIVE OR NEGATIVE? 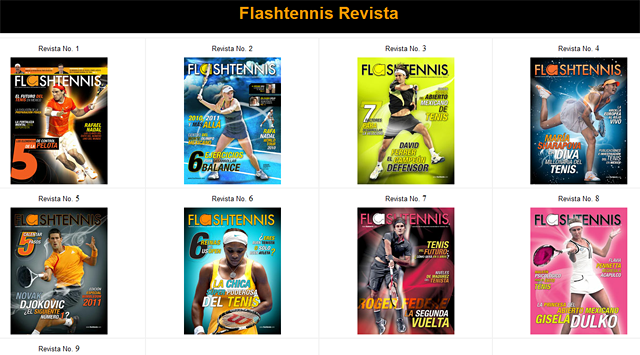